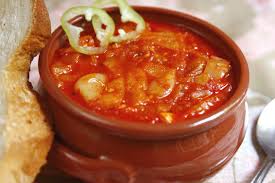 The autumn is here, in Hungary there is a saying: it’s lecho time. It means that it is the perfect time of preserving the famous Hungarian dish the Lecho.

This excellent food, -in English is Lecho, (pronounced “LETCH-oh”) and in Hungarian it’s Lecsó- is an originally Hungarian vegetable ratatouille which contains peppers and tomato, onion, lard, salt, (sugar optional) and ground paprika as a basic recipe. In northern Hungary, the onions and peppers are usually sautéed in lard or bacon fat, while in the south sunflower oil is more commonly used. Lecho, like its French semi-counterpart ratatouille, often stands alone as a lunch dish or dinner, in which case is often consumed with bread.

There is a large variety of the way of the cooking of the lecho, however the base of all a mixture of tomatoes and peppers (sweet and hot as well), onions, a fair amount of red paprika powder and sometimes garlic. To make the perfect lecho base, one must render the lard from the smoked bacon (if that is used instead of oil), and sautée the onion slices until they become slightly brownish. Next the pepper slices must be added and fried until crisp. Then a very important step comes you have to add the tomatoes because, if tomatoes added at the beginning, they would soak the onions and the peppers. At the end of cooking the lecho must be thickened with the beaten eggs (one for each person).

One type of lecho is made with potatoes, another with cooked rice or egg barley (called tarhonya, a kind of large Hungarian couscous) but most commonly lecho is eaten with a slice of fresh bread and pickles. It is also possible to make lecho with green tomatoes, and to serve the warm dish with sour cream. Some non- vegetarian recipes are prepared with delicious sausages (called “kolbász” such as lecsókolbász, made specifically for this purpose, or Debrecener sausage, sausage from the city of Debrecen) bacon or smoked pork chops. I also like to rich a pork dish with lecho. Whenever I serve it, my friends can’t stop praising it because of its unique taste (or alongside with a beef or Eszterhazy steak it’s also yammy).

It’s widely known in Hungary that the best lecsó is made over an open fire in a “bogrács” (a cauldron), which we can say it is a Hungarian style BBQ. In Hungary the dish is very popular therefore even has its own festivals, in Zsámbok and Vác. (near Budapest)

It is also considered to be traditional food in Czech, Slovak and Polish cuisine and is also very common in Austria and Israel. In Germany, lecho is referred to as Letscho and often used as the primary ingredient of a sauce that is used with many different meals. It is usually made of tomatoes, peppers, and onions among other regional additions.

In Poland, leczo is usually made from red pepper, zucchini, tomatoes, onion and garlic, sausage, and spiced with powdered chilli pepper. Leczo should be served hot and spicy. It probably came to Poland from Hungary.

This entry was posted in food, history.