Was the pomegranate the forbidden fruit in the garden of Eden? 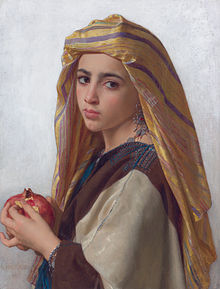 Pomegranates and their other-worldly beauty have captured imaginations since ancient times. The goddess Demeter lost her daughter Persephone to Hades, lord of the Underworld, because of this scarlet fruit, and some biblical scholars believe it, not the apple, led Eve to temptation but the pomegranate.

In Egypt as the symbol of fertility and eternal life, this ruby-hued jewel beguiles with more than just the huge burst of sweet-tart juice from every tiny seed. It’s also full of vitamin C and potassium, as well as polyphenols, the same cancer-fighting and heart-healthy antioxidants found in red wine. (Go for fresh juice to really reap the benefits.) If you think pomegranates are only for eating out of hand, refer to the following recipes for a little divine inspiration.

This whole roast chicken is flavored with a pomegranate-juice glaze and decorated with thyme and pomegranate seeds.

First clean the pomegranate: after the pomegranate is opened by scoring it with a knife and breaking it open, the arils (seed casings) are separated from the peel and internal white pulp membranes. Separating the red arils is easier in a bowl of water because the arils sink and the inedible pulp floats. Freezing the entire fruit also makes it easier to separate. Another very effective way of quickly harvesting the arils is to cut the pomegranate in half, score each half of the exterior rind four to six times, hold the pomegranate half over a bowl and smack the rind with a large spoon. The arils should eject from the pomegranate directly into the bowl, leaving only a dozen or more deeply embedded arils to remove.

Preparation of the marinade

Add the pomegranate juice to a small nonstick saucepan and bring to a boil. Keep it at a gentle boil and let the juice reduce down to around 1/3 cup. Let the juice cool for about 30 minutes.

Add remaining marinade ingredients to the saucepan with the pomegranate juice and whisk until blended.

Add your meat and all of the marinade to a sealable gallon plastic bag. Place bag in a bowl or dish and refrigerate for up to 24 hours, shaking the bag occasionally to make sure all surfaces of the meat are in contact with the marinade.

Remove meat from the marinade and start to cook the chicken.

Heat pomegranate juice in a small saucepan over medium heat until reduced to 1/4 cup. Set aside. Meanwhile, let the chicken come to room temperature for about 30 minutes. Heat oven to 450 degrees.

Brush chicken with oil and season with salt and pepper. Tie legs and transfer to a large ovenproof skillet.

Roast chicken, turning once, until golden and cooked through, about 50 minutes. Transfer to a serving dish and brush with reduced pomegranate juice; let stand 10 minutes. Deglaze skillet over medium heat with stock, scraping up brown bits with a wooden spoon. Cook until reduced by half. Strain fat. Add thyme and pomegranate seeds. Serve with chicken.

Trim excess fat in and around cavity of the turkey; remove wing tips and reserve. Generously season cavity and exterior of turkey with salt and pepper. Reserving 2 tablespoons, rub turkey with marinade and refrigerate, covered, for 6 hours.

Preheat oven to 450 degrees with rack in upper 1/3 of oven. Place onions, carrots, celery, garlic, reserved wing tips and necks, thyme, and bay leaves in a large roasting pan. Position turkey on top of vegetables so it is not crowded and tail ends meet in center of pan. Roast until the juices run clear in the legs when pricked with a fork, 45 to 60 minutes. During the last 10 minutes of roasting, baste turkey with reserved marinade mixture.

Transfer some of the onions and treviso to a large serving platter. Top with turkey and remaining vegetables. Drizzle with about 2 tablespoons gastrique. Garnish with grilled pomegranate and treviso. Sprinkle with pomegranate seeds, if desire

Pomegranate braised ribs
You can braise ribs a day ahead; let cool in liquid, then refrigerate. Discard fat before reheating in a warm oven.

Preheat oven to 275 degrees. In a large heavy pot heat 2 tbspoons of oil over high. Season ribs with salt and pepper. On batches brown ribs on all sides. Transfer to plate pour off oil, and wipe loose bits of out of pot. Reduce heat to medium-high and add remaining 3 tablespoons oil to pot. Add onion, garlic, and thyme. Cook, scraping up browned bits with a wooden spoon, until onion is softened, 5 minutes. Add flour and stir to coat. Whisk in pomegranate juice and wine and bring to a boil, stirring frequently. Return ribs to pot, cover, and transfer to oven.

Bake until ribs are easily pierced with the tip of a paring knife, about 3 hours. With a slotted spoon, carefully transfer ribs to a large platter. Strain liquid into a fat separator, let sit briefly, and return to pot, discarding fat (or, skim off fat with a spoon). Bring to a boil over medium-high and cook until reduced to a sauce-like consistency, 10 minutes. Strain through a fine-mesh sieve, season with salt and pepper, and pour over ribs. Top with pomegranate seeds.

Pomegranate all over the world

Pomegranate juice has long been a popular drink in Armenian, Persian and Indian cuisine, but began to be widely distributed in the United States and Canada only in 2002.

The entire seed is consumed raw, though the watery, tasty aril is the desired part. The taste differs depending on the subspecies of pomegranate and its ripeness. The pomegranate juice can be very sweet or sour, but most fruits are moderate in taste, with sour notes from the acidic tannins contained in the aril juice. Grenadine syrup is thickened and sweetened pomegranate juice and is used in cocktail mixing. Before tomatoes (a New World fruit) arrived in the Middle East, grenadine was widely used in many Iranian foods, and is still found in traditional recipes such as fesenjān, a thick sauce made from pomegranate juice and ground walnuts, usually spooned over duck or other poultry and rice, and in ash-e anar (pomegranate soup).

Wild pomegranate seeds are used as a spice known as anardana (from Persian: anar + dana, pomegranate + seed), most notably in Indian and Pakistani cuisine, but also as a substitute for pomegranate syrup in Persian cuisine. Dried whole arils can often be obtained in ethnic Indian subcontinent markets. These seeds are separated from the flesh, dried for 10–15 days and used as an acidic agent for chutney and curry preparation. Ground anardana is also used, which results in a deeper flavoring in dishes and prevents the seeds from getting stuck in teeth.

Dried pomegranate arils, found in some natural specialty food markets, still contain the seed and residual aril water, maintaining a natural sweet and tart flavor. Dried arils can be used in several culinary applications, such as trail mix, granola bars, or as a topping for salad, yogurt, or ice cream. In the USA chocolate covered arils may be added to desserts and baked items.

In the Caucasus, pomegranate is used mainly as juice. In Azerbaijan, a sauce from pomegranate juice (narsharab) is usually served with fish or tika kabab. In Turkey, pomegranate sauce (Turkish: nar ekşisi) is used as a salad dressing, to marinate meat, or simply to drink straight. Pomegranate seeds are also used in salads and sometimes as garnish for desserts such as güllaç Pomegranate syrup or molasses is used in muhammara, a roasted red pepper, walnut, and garlic spread popular in Syria and Turkey.

In Greece, pomegranate is used in many recipes, including kollivozoumi, a creamy broth made from boiled wheat, pomegranates and raisins, legume salad with wheat and pomegranate, traditional Middle Eastern lamb kebabs with pomegranate glaze, pomegranate eggplant relish, and avocado-pomegranate dip. Pomegranate is also made into a liqueur, and as a popular fruit confectionery used as ice cream topping, mixed with yogurt, or spread as jam on toast. In Cyprus and Greece, and among the Greek Orthodox Diaspora, is used to make koliva a mixture of wheat, pomegranate seeds, sugar, almonds and other seeds served at memorial services.

In Mexico, they are commonly used to adorn the traditional dish chiles en nogada, representing the red of the Mexican flag in the dish which evokes the green (poblano pepper), white (nogada sauce) and red (pomegranate arils) tricolor.