A Sun cake and a Mooncake for the Chinese New Year

Chinese New Year is due next weekend on the 10th of February. People are already excited because Chinese new year is the longest and most important festival in the Chinese calendar (it is also known as the Spring Festival). Within China, regional customs and traditions concerning the celebration of the Chinese new year vary widely. People will pour out their money to buy presents, decoration, material, food, and clothing. It is also traditional for every family to thoroughly cleanse the house, in order to sweep away any ill-fortune and to make way for good incoming luck. Windows and doors will be decorated with red colour paper-cuts and couplets with popular themes of “good fortune” or “happiness” “wealth”, and “longevity.” On the Eve of Chinese New Year, supper is a feast with families. Food will include such items as pigs, ducks, chicken and sweet delicacies, the Moon cake and the Sun cake. The family will end the night with firecrackers. Early the next morning, children will greet their parents by wishing them a healthy and happy new year, and receive money in red paper envelopes.

In the Chinese zodiac, 2013 the year of the snake, but its place and its significance as a symbol of worship is far less than was the last year’s powerful animal the Dragon. The snake carries the meanings of malevolence, cattiness and mystery, as well as acumen, divination and the ability to distinguish herbs. In some places, people believe that a snake found in their court can bring delight.

The story of the Moon cake and the Sun cake 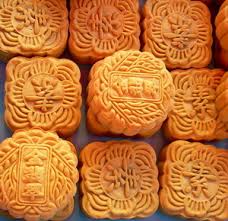 Moon cake (pinyin) was originally prepared for Mid-Autumn Festival for lunar worship and moon watching, when moon cakes were regarded as an indispensable delicacy. Today Moon cakes are the major ingredients of the Chinese new years offered between friends or on family gatherings while celebrating the festival.

Typical moon cakes are round or rectangular pastries, measuring about 10 cm in diameter and 4–5 cm thick. This is the Cantonese moon cake, eaten in southern China (Guangdong, Hong Kong). A rich thick filling usually made from red bean or lotus seed paste is surrounded by a thin (2–3 mm) crust and may contain yolks from salted duck eggs. Moon cakes are usually eaten in small wedges accompanied by Chinese tea. Today, it is customary for businessmen and families to present them to their clients or relatives as presents, helping to fuel a demand for high-end moon cake styles. The caloric content of a moon cake is approximately 1,000 calories.

The festival is intricately linked to the legends of Chang E, the mythical Moon Goddess of Immortality. According to “Li-Ji”, an ancient Chinese book recording customs and ceremonies, the Chinese Emperor should offer sacrifices to the sun in spring and the moon in autumn. The 15th day of the 8th lunar month is the day called “Mid-Autumn”. The night on the 15th of the 8th lunar month is also called “Night of the Moon”. Under the Song Dynasty (420), the day was officially declared the Mid-Autumn Festival. 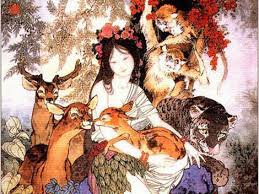 An important part of the festival celebration is moon worship. The ancient Chinese believed in rejuvenation being associated with the moon and water, and connected this concept to the menses of women, calling it “monthly water”. The Zhuang people, for example, have an ancient fable saying the sun and moon are a couple and the stars are their children, and when the moon is pregnant, it becomes round, and then becomes crescent after giving birth to a child. These beliefs made it popular among women to worship and give offerings to the moon on this evening. In some areas of China, there are still customs in which “men don’t worship the moon and the women don’t offer sacrifices to the kitchen gods.”

Offerings are also made to a more well-known lunar deity, Chang’e, known as the Moon Goddess of Immortality. The myths associated with Chang’e explain the origin of moon worship during this day. One version of the story is as follows, as described in Lihui Yang’s Handbook of Chinese Mythology

In the ancient past, there was a hero named [Hou] Yi who was excellent at shooting. His wife was Chang’e. One year, the ten suns rose in the sky together, causing great disaster to people. Yi shot down nine of the suns and left only one to provide light. An immortal admired Yi and sent him the elixir of immortality. Yi did not want to leave Chang’e and be immortal without her, so he let Chang’e keep the elixir. But Feng Meng, one of his apprentices, knew this secret. So, on the fifteenth of August in the lunar calendar, when Yi went hunting, Feng Meng broke into Yi’s house and forced Chang’e to give the elixir to him. Chang’e refused to do so. Instead, she swallowed it and flew into the sky. Since she loved her husband very much and hoped to live nearby, she chose the moon for her residence. When Yi came back and learned what had happened, he felt so sad that he displayed the fruits and cakes Chang’e liked in the yard and gave sacrifices to his wife. People soon learned about these activities, and since they also were sympathetic to Chang’e they participated in these sacrifices with Yi.

Yang describes another version of the tale which provides a different reason for Chang’e ascending to the moon:

After the hero Houyi shot sown nine of the ten suns, he was pronounced king by the thankful people. However, he soon became a conceited and tyrannical ruler. In order to live long without death, he asked for the elixir from Xiwangmu. But his wife, Chang’e, stole it on the fifteenth of August because she did not want the cruel king to live long and hurt more people. She took the magic potion to prevent her husband from becoming immortal. Houyi was so angry when discovered that Chang’e took the elixir, he shot at his wife as she flew toward the moon, though he missed. Chang’e fled to the moon and became the spirit of the moon. Houyi died soon because he was overcome with great anger. Thereafter, people offer a sacrifice to Chang’e on every lunar fifteenth of August to commemorate Chang’e’s action.

There is a folk tale about the overthrow of Mongol rule facilitated by messages smuggled in moon cakes. Moon cakes were used as a medium by the Ming revolutionaries in their espionage effort to secretly distribute letters to overthrow the Mongolian rulers of China in the Yuan dynasty. The idea is said to have been conceived by Zhu Yuanzhang and his advisor Liu Bowen who circulated a rumor that a deadly plague was spreading, and the only way to prevent it was to eat special moon cakes. This prompted the quick distribution of moon cakes, which were used to hide a secret message coordinating the Han Chinese revolt on the 15th day of the eighth lunar month. Another method of hiding the message was printed in the surface of moon cakes as a simple puzzle or mosaic. To read the encrypted message, each of the four moon cakes packaged together must be cut into four parts each. The 16 pieces of moon cake, must then be pieced together in such a fashion that the secret messages can be read. The pieces of moon cake are then eaten to destroy the message. Many types of fillings can be found in traditional moon cakes according to the region’s culture:

Lotus seed paste: Considered to be the original and most luxurious moon cake filling, lotus paste filling is found in all types of moon cakes. Due to the high price of lotus paste, white kidney bean paste is sometimes used as a filling.

Sweet bean paste: A number of pastes are common fillings found in Chinese desserts. Although red bean paste, made from azuki beans, is the most common worldwide, there are regional and original preferences for bean paste made from mung beans, as well as black beans, known throughout history.

Jujube paste: A sweet paste is made from the ripe fruits of the jujube (date) plant. The paste is dark red in color, a little fruity/smoky in flavor, and slightly sour in taste. Depending on the quality of the paste, jujube paste may be confused with red bean paste, which is sometimes used as a filling.

Five kernel: A filling consisting of 5 types of nuts and seeds, coarsely chopped, is held together with maltose syrup. Recipes differ from region to region, but commonly used nuts and seeds include: walnuts, pumpkin seeds, watermelon seeds, peanuts, sesame seeds, or almonds. In addition, the mixture will usually contain candied winter melon, jinhua ham, or pieces of rock sugar as additional flavoring.

The suncake (tàiyáng bĭng) is a popular Taiwanese dessert originally from the city of Taichung in Taiwan. The typical fillings consist of maltose (condensed malt sugar), and they are usually sold in special gift boxes as souvenirs for visitors. Some famous sun cake pastry shops always have long lines of people waiting to buy boxed sun cakes.

The shape of sun cakes is round, of varied sizes. They are characterized by Flaky crusts. Most people eat them with Chinese tea, and some people dissolve them in hot water to make a porridge-like dessert

The first sun cakes were made by the Lin family in the She-Ko Taichung. The Lin family used condensed malt sugar as a filling for cake pastries. Later on, pastry maker Wei Qing-hai modified the cakes to their current form. Though not originally called “sun cakes”, they were given the name by the owner of “Sun Booth”, one of the most famous pastry shops that sells them. The name was not trademarked, and other pastry shops used the same name for their own sun cakes.

This entry was posted in food, history and tagged food, restaurants.