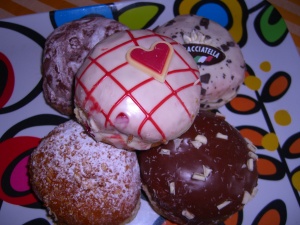 That the carnival season has set in it’s possible to notice from the tons of doughnuts in the shop windows of the German bakeries,-called Berliner- while Berliners are traditionally eaten to celebrate the carnival holidays (Mardi Gras).

A Berliner or Pfannkuchen (also called Krapfen, fánk in Hungary, Bola de Berlim in Portugal, berliininmunkki in Finland, sufganiyah in Israel, kobliha in the Czech Republic, šiška in Slovakia, pączek in Poland,berlinesas in Mexico, berlinerbolle in Norway bola de fraile in Argentina, bombolone in Italy, Berlinerbol in the Netherlands, and bismark in Canada and parts of the United States) is a predominantly German and Central European doughnut (without a central hole) made from sweet yeast dough fried in fat or oil, with a marmalade or jam filling and usually icing, powdered sugar or conventional sugar on top. They are sometimes made with chocolate, champagne, custard, mocha, or advocaat filling, or with no filling at all. The filling is injected with a large syringe after the pastry is fried.

The traditional Pfannkuchen made in Berlin are fried in grease. The filling is related to the topping: for plum-butter, powdered sugar; for raspberry, strawberry and cherry jam, sugar; for all other fillings, sugar icing. A common German practical joke is to secretly fill some Berliners with mustard instead of jam and serve them together with regular Berliners without telling anyone.

The terminology used to refer to this delicacy differs in various areas of Germany. While most areas call it Berliner (Ballen), the Berliners themselves and residents of Brandenburg, Western Pomerania, Saxony-Anhalt but Saxony knows them as Pfannkuchen, which in the rest of Germany generally means pancakes. In Bavaria, as well as in much of Austria, they are a variety of Krapfen (derived from Old High German kraffo and furthermore related to Gothic language krappa). In Hessen they are referred to as Kräppel or Kreppel. Residents of the Palatinate call them Fastnachtsküchelchen (“little carnival cakes”), hence the English term for a pastry called “Fasnacht”; however further south, the Swabians use the equivalent term in their distinctive dialect: Fasnetskiachla. In South Tyrol and Triveneto (part of northern Italy), the donut is called krafen or krapfen, while in the southern parts it can be referred as bomba or bombolone. In Slovenia, it is krof; in Croatia krafni; in Bosnia, and Serbia krofne. In Poland they are known as pączki, in the Czech Republic as kobliha. In Hungary, it is called fánk. All of these are essentially identical preparations.

In English-speaking countries, Berliners are called doughnuts and are usually filled with jam, jelly, custard or whipped cream. However, in South Australia, the Kitchener bun is a Berliner cut on the side for the filling of jam and cream. In Anglophone North America, the most common term for the jam- or jelly-filled pastry is “jelly doughnut”. The name is somewhat misleading, since the jam or jelly used is specially made with less pectin, so that it does not “set” like jams and jellies manufactured for table use but has a consistency comparable to Bavarian cream.

In Ontario and the prairie western provinces of Canada, as well as parts of the Midwest in the US, such a round jelly- or custard-filled doughnut is commonly called a “bismark,” while a filled bar doughnut is called a “long john“, and usually contains pastry cream, custard or whipped cream but can contain a jelly filling. Other Canadian terms include “jambuster” in Manitoba, and “Burlington bun” in Nova Scotia.

In Portugal, berliners are slightly bigger than their German counterparts. They are known as bolas de Berlim (Berlin ball) and the filling is always an egg-yolk based yellow cream called creme pasteleiro (lit. confectioner’s cream). The filling is inserted after a half length cut and is always visible. Regular sugar is used to sprinkle it. They can be found in almost every pastry shop in the country.

Such versions are also found in Latin America, in Chile, Uruguay and Argentina, where it’s not only filled with custard (called “Crema pastelera”), but with jam (especially red ones) or manjar blanco. In Brazil, berliners are called sonhos (dreams) and traditionally filled with yellow cream (called simply creme). Some modern variants filled with milk jam or a mix of chocolate and milk jam can be found in Rio de Janeiro’s bakeries.

In Hungary there is a traditional sweet delicacy similar to doughnut and called fánk. The most commonly used ingredients are: flour, yeast, butter, egg yolk, a little bit of rum, salt, milk and oil to deep fry with. After the pastry has risen for approximately 30 minutes the result is an extreme light doughnut-like pastry. Fánk is mostly served with powdered sugar and lekvar.

An oliebol-lard ball is a traditional Dutch sweet and are traditionally eaten at funfairs. In wintertime, they are also sold in the street at mobile stalls. In the Flanders part of Belgium and Brussels they are called smoutebollen (literally lard balls although the real “smout” is fried in rapeseed oil instead of animal fat). In English they are more commonly known as Dutch Doughnuts or Dutchies.

Oliebollen are a variety of dumpling made by using an ice-scooper or two spoons to scoop a certain amount of dough and dropping the dough into a deep fryer filled with hot oil. In this way, a sphere-shaped oliebol emerges.

The dough is made from flour, eggs, yeast, some salt, milk, baking powder and usually sultanas, currants, raisins and sometimes zest or succade. A notable variety is the appelbeignet which contains only a slice of apple, but different from oliebollen, the dough should not rise for at least an hour. Oliebollen are usually served with powdered sugar.

They are said to have been first eaten by Germanic tribes in the Netherlands during the Yule tide, the period between December 26 and January 6. The Germanic goddess Perchta, together with evil spirits, would fly through the mid-winter sky. To appease these spirits, food was offered, much of which contained deep-fried dough. It was said Perchta would try to cut open the bellies of all she came across, but because of the fat in the oliebollen, her sword would slide off the body of whoever ate them. A very similar type of doughnut can also be found in the Walloon part of Belgium as well as the northern part of France. The croustillons are deep fried dough balls served hot and liberally sprinkled with powdered sugar. They are usually served in a paper cone with a little plastic fork to eat them with. They are typically found at fairgrounds in Belgium and in Lille, France.

Urban legend about the doughnut

Ich bin ein Berliner- “I am a Berliner” is a quotation from a June 26, 1963, speech by U.S. President John F. Kennedy in West Berlin. An urban legend has it that due to his use of the indefinite article ein, Berliner is translated as jelly doughnut, and that the population of Berlin was amused by the supposed mistake. The normal convention when stating a nationality or, for instance, saying one is from Berlin, would be to leave out the indefinite article ein. However, Kennedy used the indefinite article here correctly to emphasize his relation to Berlin. Additionally, the word Berliner is not used in Berlin to refer to the Berliner Pfannkuchen. These are simply called Pfannkuchen there and therefore no one from Berlin would mistake Berliner for a pastry.