There is no week without chicory! 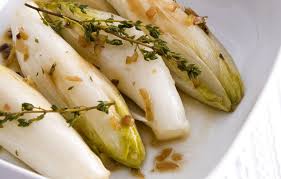 My first encounter with the chicory happened in the canteen of the Catholic University Leuven (Belgium). I selected it accidentaly from the menu offer because it looked like a steamed vegetable. But when I tasted it my face turned bitter because of its bitter taste. I didn’t like it at all! But then about one year later when I was offered a curry flavored chicory soup on a wedding reception, it tasted so good, so I asked for the recipe. And well that was I think the turning point and after that event I became suddenly addicted to the chicory. 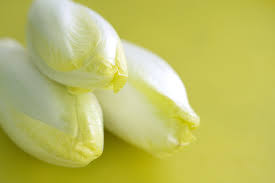 In 2000 I visited a chicory farm near Antwerp, Belgium (Schaerbeek). It was a very interesting “tour” and at the same time very instructive. In the farm, the Belgian chicories were grown completely underground and indoors but the most important thing was in the absence of sunlight to prevent the leaves from turning green and opening up. Our guide explained it, that the plant has to be kept just below the soil surface as it grows, only showing the very tip of the leaves. That’s why chicory is often sold wrapped in blue paper to protect it from light and so preserve its pale colour and delicate flavour. I had the opportuntity to examine the plant closely, I touched the small cream-coloured heads, and tasted the bitter but succulent raw leaves. I liked the welcome chicory salad with mustard and vinegar dressing and enriched with fois gras very much (see the recipe below). To sum my stories up since that visit there is no week without chicory. I also invented a few of my own chicory recipes. I have to say- without blowing my own trumpet- that who tastes my chicory-caramelized in porto wine and flavored with curry- will be as passionate chicory fan as me.

The chicory is also known as blue sailors, succory, coffeeweed, “cornflower”, radicchio, Belgian endive, French endive, red endive, sugarloaf and witloof or witlof- (by the way it has a beautiful blue flower, no wonder that it is often seen as inspiration for the Romantic concept). In the past, Medieval monks started to raise the plants and when coffee was introduced to Europe, the Dutch thought that chicory made a lively addition to the bean drink. And they were right because chicory soon had become a coffee substitute (my grandma also prepared coffee from it). In the course of the centuries their bitterness started to be appreciated in certain cuisines, such as in the Liguria and Puglia regions of Italy and also in Catalonia (Spain), in Greece and in Turkey. In the Ligurian cuisine the wild chicory leaves are an ingredient of the dish preboggion and in Greek cuisine of the horta.
In the Puglian region wild chicory leaves are combined with fava bean puree in the traditional local dish called Fave e Cicorie Selvatiche. In Rome puntarelle is a favorite dish made with chicory sprouts.
How to cook: By cooking and discarding the water the bitterness is reduced, after which the chicory leaves may be sauteed with garlic, anchovies and other ingredients. In this form the resulting greens might be combined accompany meat dishes. The smooth, creamy white leaves may be served stuffed with minced meat, baked in butter, boiled, cut and cooked in a milk sauce, or simply cut raw. The tender leaves are slightly bitter; the whiter the leaf, the less bitter the taste. The most important that the harder inner part of the stem at the bottom of the head should be cut out before cooking in order to prevent bitterness! And there is one more secret, add a pinch of sugar while cooking.
Recipes

Direction: Trim away the stalk ends of the chicory, discard any limp or tired outer leaves, then strip into leaves. Bestrew the outer leaves with sugar then caramelized under a broiler/salamander or with a blow torch until crisp. Cut the rest of the chicory fine and flavor with salt and pepper. Pour over raspberry vinegair. Chop the duck filets very fine and make creamy the goose liver with a fork. Place liver and finely chopped duck filets onto caramelized chicory leaves. Serve it with fresh baguette. Excellent starter for the festive season!

Soatéed chicory with or without ham

Trim the heads of chicory, cutting off imperfect leaves and trimming the root. Slice each head in half from root to tip.Warm the butter in a casserole dish over a moderate flame, then place the halved chicory in it cut side up so that it sits snugly inside. Tuck in the garlic. Let both chicory and garlic colour slightly in the hot butter, then turn them over. Cover with a lid and leave to cook slowly in the butter. Take care that the chicory does not colour too quickly. Once the underside turns pale gold, squeeze over the lemon, then scatter the crumbs and grated parmesan evenly over the top. Transfer, still covered, to an oven preheated 190 degrees and bake for around 30 minutes, until the cheese has melted. Serve hot, as a side dish.

1. Preheat the oven to 180°C/fan 160°C/gas 4. Place the chicory, cut-side up, in an ovenproof dish. Dot all over with the butter and splash over the wine and stock.

2. Season with black pepper and with lots of curry then cover with foil. Cook for 20-25 minutes, then remove the foil and cook for a further 10 minutes until really tender. Sprinkle with the parsley and serve.

It makes excellent sidedish (with lam, duck or chicken)

First prepare stuffing. Mix bread crumb with the egg, the finely chopped onion, chicken liver, cream cheese and season with parsley. Put it in the food processor and blend well. Season the guinea fowl with salt and pepper. Loosen the skin and place the stuffing in the cavity. Secure the edges with kitchen string and sauté bird in melted butter, initially over high heat then lower. Season and turn guinea fowl as you do so. After twenty minutes add chicories (cut in quarters) and pour over 300 ml of porto wine. Add bay leaf, cloves and simmer chicory in the fat of the bird. After about 25 minutes when the guinea fowl is tender prepare potato purée and serve with it.