Here in Europe everybody is frustrated by the nasty weather, we’d need the sunshine, for the chlorophyll but there is no sign of spring not a thiny bud and what is more it has been snowing for 2 days and the weather forecast is not so optimistic for Easter as well!
We will be for lots of rain and the temperature will remain bellow zero (during the nights) which is not normal for the time of the season.
But anyway….to fulfil my hunger for green this delicate green tea matcha layer cake occured to me what I ate last time in Japan and loved it very much. Here it is the recipe from my Japanese sister- in-law:
Green tea layer cake

Sift together the all purpose flour, cake flour, baking soda, salt, green tea powder, set aside. In a large bowl beat together sugar, oil, and eggs until smooth.

Beat in the flour mixture alternatively with the joghurt, mixing just until incorporated. Pour batter into prepared pans. Bake in the oven for 30-40 minutes, or until a toothpick inserted into center of the cake comes put clean. Cool on wire rack for 30 minutes before turning out of the pans.

To make the green tea frosting: sift together confectioner sugar and green tea powder. In a medium bowl, combine tea powder mixture with butter, cream cheese, vanilla, milk. If it necessary beat ingredients with an electric mixeruntil smooth. to assemble the cakes: when the cakes are completely cooled put one layer on a flat serving plate. Spread a thin layer of frosting over it. Place the other layer of cake on top, and spread frosting to cover the top and sides of cake. Dust with green tea powder if desired. Serve cold or at room temperature.

Other version for the icing: sift the powdered suger with the green tea powder in a bowl. In a second bowl mix the sugar with butter, cream cheese or joghurt, vanilla extract and milk. Beat until smooth with an electric mixer. Spread icing on the cooled cakes, distributing evenly. To enhance the appearance you could sprinkle small amount of the green tea powder on top.

This entry was posted in food and tagged dessert, food, powdered green tea.

Easter is knocking at the door so for the this year festive treatment I decided to serve a Hungarian poppy-apple-raisin–strudel, which is in Hungary known as rétes.

More precisely rétes is a type of layered pastry with a— most often sweet—filling. It is also often served in warm with cream or vanilla custard. It became popular in Hungary in the 18th century through the Habsburg Empire so that it is most often associated with Austrian cuisine but is also a traditional pastry in the whole area of the former Austro-Hungarian empire.

The oldest Strudel recipe (a millirahmstrudel) is originated from 1696, in a handwritten recipe at the Viennese City Library. The pastry descends from similar Near Eastern pastries (see baklava and Turkish cuisine).

The best-known strudels however are the German Apfelstrudel (German for apple strudel) and Topfenstrudel (with sweet soft quark cheese, in German Topfen cheese), followed by the Millirahmstrudel (Milk-cream strudel, Milchrahmstrudel).

In Slovenia, cottage cheese is used instead of quark ( I also love that filling). In Hungary according to the fillings there are lots of strudel types include sour cherry (Weichselstrudel), sweet cherry, nut filled (Nussstrudel), Apricot Strudel, Plum Strudel, Poppy seed strudel (Mohnstrudel), and raisin strudel. There are also savory strudels incorporating spinach, cabbage, pumpkin, and sauerkraut and versions containing meat fillings like the (Lungenstrudel) or (Fleischstrudel).

Good to know about the strudel

Traditional Austrian, Hungarian and Czech Strudel pastry is different from strudels elsewhere, which are often made from puff pastry because the dough is very elastic. It is made from flour with a high gluten content, egg, water, and butter with no sugar added. The dough is worked vigorously, rested, and then rolled out and stretched by hand very thinly with the help of a clean linen tea towel or kitchen paper. Purists say that it should be so thin that you can read a newspaper through it. A legend has it that the Austrian Emperor’s perfectionist cook decreed that it should be possible to read a love letter through it. The thin dough is still laid out on a tea towel, and the filling is spread on it. The dough with the filling on top is rolled up carefully with the help of the tea towel and baked in the oven.

Instead of dealing with the difficult streching process I decided to buy a philo pastry then I made the poppy-apple filling.

Preheat the oven to 200 degrees/380 F. Combine the rum and raisins in a small bowl and let them sit for 15 minutes.

In a saucepan, combine the apples, brown sugar, and 1/2 cup water. Bring to a simmer and cook until the apples soften and breakdown. Set aside and let cool. Combine the cinnamon, granulated sugar, and nuts together. Add to apples.

Prepare the ground poppy, add sugar and raisin and vanilla sugar and grated lemon zest to it. Add sour cream or cream but be careful do not overdo. Mix poppy and apples together.

Melt 2 to 4 tablespoons butter. Lay out a phyllo pastry sheet, brush with melted butter, sprinkle with nut sugar mixture or bread crumbes, and put another sheet on top. Repeat this process until all 7 sheets are used up.

On the last buttered sheet, put stewed apple poppy mixture in a line across the sheet horizontally, leaving 1- inch on each side.

Carefully roll the pastry away from you to resemble a log.

Close the ends with your fingers, brush the top with butter, and sprinkle extra brown sugar on top. Bake in the oven until lightly browned and crisp on top, 35 to 40 minutes.  Let it cool, then sprinkle with castor sugar and serve in 2-inch slices with whipped cream. 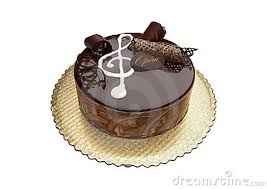 Opera Cake is a type of French cake. It is said to have made its “grand debut” in the early 1900s in Paris at the Exposition Culinaire. It was introduced by Louis Clichy, which is why the cake may be referred to as Gâteau Clichy. However it wasn’t until many years later, when Parisian pâtisserie Dalloyau reintroduced the cake as “L’Opera,” (after the Paris Grand Opera), that it became immortal. And really, as the Balduccis description says, “The name makes sense, as the cake is comprised of several layers, similar to ‘acts’ in an operatic presentation.

It is a very demanding cake to make with layers of almond sponge cake (known as Joconde in French as well). According to Larousse Gastronomique “Opéra gateau is an elaborate almond sponge cake with a coffee and chocolate filling and icing.” The cake was popularized by the French pâtisserie house Dalloyau.

Whip the 2 egg yolks and the whole egg with the ¼ cup of sugar until it is thick, pale and holds a ribbon when the beaters are lifted. In a separate bowl, stir the ground almonds and flour together.

In another bowl, whip the 2 egg whites until foamy, then slowly add the remaining 2 Tbsp of sugar, whipping until they hold a soft peak when the beaters are lifted. Fold the whipped whites into the yolks in 2 additions, then fold in the almond mixture. Spread this evenly over the prepared sheet pan, ensuring that the batter is as level as possible (the batter will only make a thin layer). Bake the cake for about 8 minutes, until golden brown and allow to cool. Once cooled the cake make dry a bit – that is expected.

For the ganache, heat the cream until it just begins to simmer and then pour this over the 8 ounces of chopped chocolate. Let this sit a minute, then gently stir with a spatula starting at the centre and widening the circles until the chocolate has fully melted and the ganache is smooth. Set aside to cool to room temperature.

For the butter cream, place the egg whites in a bowl and whip with the 2 Tbsp of sugar until just past foamy. Place the remaining ½ cup of sugar in a small pot with 2 Tbsp of water and bring to a full boil over high heat, boiling until the sugar hits 240 F on a candy thermometer. With the mixer on medium speed, carefully add the hot sugar to the whipped whites by pouring it down the side of the bowl (this helps to avoid splashing), then increase the speed and whip until the whites have cooled to room temperature, about 4 minutes. While beating, add the butter a few pieces at a time until combined. While adding the butter, if it appears that the butter cream is not fluffy, or seems curdled, not to worry – simply keep adding the butter, continue to beat and it will come together. There is no risk of overbeating. Add the coffee extract (or espresso) and the vanilla and use at room temperature.

For the assembly, remove the sheet of cake and cut into three rectangles (about 6-x-11-inches). Brush the bottom of one of the layers with the melted coating chocolate and let this set until firm (or chill 3 minutes). Place this layer, chocolate-side down onto a flat cake board or platter. Brush the layer with coffee syrup then spread half of the butter cream on top. Top this with a second cake layer, brush it with syrup and now spread two thirds of the cooled (but still spreadable) ganache layer over the cake. Place the final cake layer over the ganache, brush it with syrup and spread the remaining half of the butter cream on top (or you can save about 1/4 cup for garnish).

For the ganache glaze, re-warm the remaining one third of the ganache, adding the coating chocolate and vegetable oil, stirring until smooth. Spread this over the top of the cake (but not the sides), and chill until set, about 2 hours.

Before serving, trim the sides away to reveal clean layers then slice into 6 rectangle portions (a hot, dry knife makes this easy). If you wish, pipe a little coffee buttercream on top of each and place a coffee bean on top.

This dish is a much easier to make.

Direction: For the meatballs, place all ingredients in a bowl and season to taste with salt and pepper. Mix well to combine. Form tablespoonfuls of mixture into balls (12 balls each circa 40 grams)

Heat five tablespoons of oil in a large frying pan or saucepan over high heat. Add meatballs and cook, turning occasionally, for 5 minutes or until well browned. Remove from pan and set aside.

Add chopped onion, carrot, celery to pan and cook, stirring, over medium heat for 5 minutes or until tender. Pour over wine or wine with the stock and simmer until reduced by 1/2. Return meatballs to pan with tomatoes and bring to the boil. Cover and cook for 15 minutes or until sauce is thickened.

Place meatballs on the tomato sauce then serve scattered with flaked parmesan.