Much ado about the Tenderloin of Brasov

Brașov is not only a beautiful medieval city in Romania (which is located in the central part of the country, about 166 km north of Bucharest) but also the name of a delicious and easy to prepare Hungarian dish the Tenderloin of Brasov. It might originate from the Transylvania region but how did it earn its name it is still a mystery however I have found some assumptions:

1st: The recipe was found out in 1948 by Nándor Gróf, who was the cook of a restaurant car, on the Budapest-Brasov advanced train line (Garlic, pepper, potato variant, pork.)

The 2d version: György Dózsa, a master cook claimed it referring to a 19th century cook book, that the food originates from Brasov, and in fact it is a garlic cattle stew (a potato variant, garlic one fried a porcupine on bacon from beef.)

The 3d: the most authentic source is a book by Sándor Csáky: 20st century’s culinary art, according to it the original recipe of the Tenderloin of Brasov was made of a steak, and was invented by an unknown cook. (tomato-mushroom variant with red wine and with egg barley).

According to Endre Papp’s statement, (a profi cook) he claims to be the creator of the dish that he prepared onto a food innovation competition on 17 of September 1950. He gave it the name Tenderloin of Brasov because the memory of Trianon (painful lost for the Hungarians) lived on in his memory strongly yet. (Bacon, tenderloin, bulbous, tomato, green pepper variant with green peas, with a fried, potato roasted.)

According to the Old Buda (the historical part of Budapest) variant, the recipe was invented by the wife of a pub’s owner called Weiss, as the dish was specially made for a carpenter, certain Károly Brassóy’s birthday thus the plate was named after him (his family name was Brassóy written with a -y) (Marjoram, bulbous from pork, egg barley with garnish).

The tenderloin of Brasov is considered to be kind of a traditional dishes of Hungary such as Chilli con carne in Mexico. Of course there are different variations from region to region but in most parts of Hungary it is made with lard-bacon, minced meat, onion, marjoram, and garlic are also common additions to the basic recipe. The special and unusual twist is the peas. 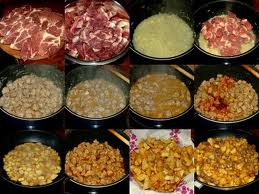 Brasov with peas (the classic version)

Wash and dry the meat with a kitchen papertowel, and cut it into two to three inch cubes. Chop onions and garlic. Fry the bacon with the onion and garlic, simmer together everything. Add meat and spices, and then let them cook. You can always add water if necessary.

When the meat is tender, pour the peas. Depending on what do you use canned or fresh peas, simmer until the beans are tender. Serve with French fries or potato purée.

The Romanian and Hungarian names are both derived from the Turkic word barasu, meaning “white water”, in Romanian with a Slavic suffix -ov but in Hungarian it is just pronounced Brassó-Brashow.

This entry was posted in food, history and tagged transylvania region.